The Quiznos of Tomorrow Has Arrived 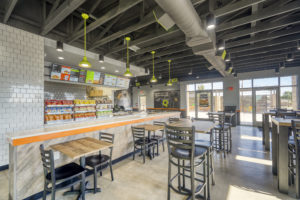 Quiznos is familiar with being an industry disruptor, says Brent Phillip, vice president of marketing and digital experience for parent REGO Restaurant Group. After all, the 41-year-old company prides itself as being the home of the original toasted sub.

With that same pioneering strategy in mind, the sandwich chain is moving forward with a differentiated store prototype, the first of which popped up in Hobbs, New Mexico. Phillip describes the branding as clean, simple, and contemporary, with a local community flair. The color scheme includes a lot of black and gray, with some bright neon green and orange—honoring what Quiznos was in the past, but signaling to guests that it’s a new experience compared to previous versions they’ve visited.

“The new restaurant is really a redesigned and reimagined Quiznos, built truly to evolving consumer interest,” Phillip says. “So it is founded on extensive research that was done prior to the pandemic and through the pandemic for what should Quiznos look like and feel like in terms of consumers experience, to provide them what they’re seeking today, but also really truly ‘wow.’”

Operationally, the kitchen is completely restructured. Whereas back-of-house was previously focused on the toaster, the new design incorporates a flat top grill and deep fryer, allowing Quiznos to explore a bigger, globally inspired menu.

Some examples of sandwich innovation include the Asian Steak Dipper, the Steakhouse Philly, the Carne Supreme, and Steak and Eggs, an all-day breakfast item served with fried eggs, grilled steak, white American cheese, grilled onions and peppers, and cherry peppers. Other new options are the Steak and Frites and Cobb salads, an enhanced veggie guacamole, and Beyond Italian Sausage made with provolone, grilled peppers and onions, and marinara.

“That was really the first reason why we look to those pieces of equipment, and then once that opened up, it allowed us to really start to dive into what was possible that we could actually bring in from new menu items, new side items, and really drive those pieces of equipment to add value and help franchisees realize the return on investment,” Boudreaux says.

Including the latest Hobbs, New Mexico, location, Quiznos has four drive-thru restaurants in its system, but that number is set to increase under the fast casual’s renewed growth strategy. The company’s drive-thru units outperformed the entire system throughout COVID because of their ability to  keep operations going when municipalities implemented restrictions. At the Hobbs outlet, the off-premises channel mixes roughly 60 percent.

One of Quizno’s drive-thru restaurants, based at the end of a shopping center, retroactively installed its lane. Boudreaux and Phillip believe there may be similar opportunities elsewhere. There will also be chances for franchisees to relocate into spaces that better support drive-thru or re-build with the channel in mind.

“I think our take is it’s really store by store dependent. And that could even be zip code by zip code dependent, as well,” Phillip says. “There’s a lot of factors that it’s hard for us to say what percentage of the footprint is ready for or is possible to do that. I think there’s a great opportunity for a good amount, and it’ll just take time to be able to do all the diligence to really figure out for each store what can we transform to meet the consumer interest.”

In terms of branding and aesthetics, franchisees will have the option of simply updating logos and color schemes or going with the full-fledged approach of adding new equipment. The typical Quiznos restaurant is about 1,300 square feet, while the Hobbs store is about 2,000. The company anticipates future units will be substantially smaller.

“What I can share today is that we are very far along in a rather revolutionary approach to the restaurant model that will pick up on a lot of the components that are at the Hobbs restaurant that just opened, but will also contain some really cool options for considerably smaller site opportunities,” Phillip says. “Greg and I are both really excited about the opportunity for utilizing sites that others typically couldn’t because of the size of a footprint that is in development today.”

Quiznos had nearly 5,000 U.S. restaurants in the late 2000s before seeing its footprint shrink due to the Great Recession, growing competition from fast casuals, and issues with franchisee profitability. The company declared bankruptcy in 2014, and four years later, private equity firm High Bluff Capital purchased the sandwich chain. Quiznos was placed under the watch of REGO, which also oversees Taco Del Mar.

The brand had 306 U.S. outlets to start 2019, and that number has now dipped below 200. There are expectations that a handful of new locations will open this year with the new design, followed by dozens more in 2023. Phillip says Quiznos will see a “rather sharp curve” to growth in 2024 and beyond. He believes the brand can leverage its “massive” consumer awareness to enter new and existing markets across the country, no matter the geography. The idea is to sign big deals with multi-unit operators and build out areas.

Quiznos is almost entirely franchisee-owned, and Phillip says the concept will stick to that methodology as it battles for more market share and expansion opportunities in the coming years.

“So we really do see franchisees as important partners in this and needing their feedback, their learnings, their knowledge to represent a variety of markets to help drive the brand forward,” he adds. “So when you think about two things, one is brand development, and we see franchisees as a critical part of that, but we also see the restaurant economics as also reliant on entrepreneurial, inspired franchises.”